Art, culture and the Mediterranean Sea

Barcelona enchants tourists with its museums, its Gothic style, its Modernist art, its historical centre, its green areas, multiculturalism...

Barcelona is a lively city which changes in the course of the time and the seasons. Barcelona is, first of all, a maritime Mediterranean city. The port of Atarazanas is the start of well-known walkway 'Las Ramblas', which takes you to the Barceloneta beach and to the Olimpic area.

The Gothic Quarter represents the old city of Barcelona. There, you can see the Roman wall paintings, the Royal Palace and its surroundings, the Cathedral, the square Plaza San Jaime, the palace of the Regional Government (Generalitat), the Townhall (Casa de la Ciudad)... If you continue towards the old quarter 'La Ribera', you can visit the impressive church of Santa María del Mar, as well as the different museums, such as the one of Picasso. If you walk through via Layetana, you will arrive at the Palace of Music (Palacio de la Música).

Barcelona has emblematic streets, such as Las Ramblas or Paseo de Gracia, among others. You should go through them and wander around Plaza Catalunya. Paseo de Gracia shows the Modernist architecture of Antonio Gaudí, also represented in the Sagrada Familia and in the natural setting of Park Güel (Quarter of Horta). Then, in the same area, you can visit the Laberinto garden (with a labyrinth) and, if you prefer wander around a widen green area, we recommend you the Ciutadella Park. But if you want to enjoy the panoramic views of the city, go up to Tibidabo or Montjuïc mountains, where children will really have a good time. 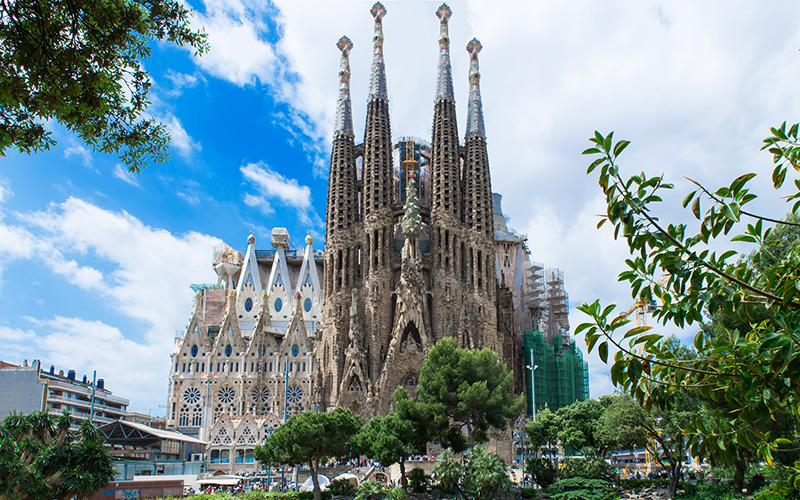 Sagrada Familia is a large church in Barcelona which was designed by the Catalan architect Antoni Gaudí. The church is still under construction. It represents the masterpiece of Gaudí, the best exponent of Catalan Modernist architecture. This quarter (Barrio Gótico) is located in the historic heart of the city. You must walk around its streets and explore the Cathedral and the different Medieval monuments, as well as the Roman remains which are part of the ochre stones of palaces and stately homes. Although it is a very tourist quarter, you will always find any narrow street where you can live magic moments. Park Güell is a large garden with architectonic elements. It is located on a hill named Turó del Carmel, facing the sea and not too far from Tibidabo. The park was designed by Antonio Gaudí, the best exponent of Catalan Modernism. It was built among 1900 and 1914 and it was opened as a public park in 1926.